skip to main | skip to sidebar

So right now I'm at Panera killing time until someone comes to pick me up. I just went for a job at Michaels as a part-time cashier because I need some money, and I'm going to spend it on yarn anyway. Its not the best yarn, but its still yarn. I picked up some SWS, which is probably going to end up as yet another SWS Danica. I'm undecided though, I just want a fun project that takes good advantage of the colors.

I also just picked up the Fall Interweave Knits. I don't usually buy the knitting mags, I usually just ogle. But not this time. I picked it up just to browse and just some lovely patterns. Also, it was the last copy, and I felt like if I didn't get it now I never would....not that that really makes sense because I will be in NYC tomorrow where there are about 947 Barnes & Nobles that all probably have it in stock... oh well. I'm really digging the Tilted Duster and the Luna Dress. Right now I'm a sucker for sweater dresses, but just thinking about the yarn eating uppage makes me fear for my already empty wallet.

The Sweetheart Vest looks like a project I would like too (no seaming) and I've been looking for a vest pattern. The only thing is that it makes the model look boxy, probably due to the chunky knit and the lack of shaping. If I make it I'll probably decrease some around the waist. Also, it looks like just enough fair isle for me to give it a try without pulling my hair out. Who knows, if it goes well maybe I'll even try the Mirepoix Bodice...

I've completed my Everlasting Bagstopper finally! It was languishing waiting for straps for a few weeks, but no longer! Here she is, modeled by my bathroom door and George Orwell's 1984 to give it weight. 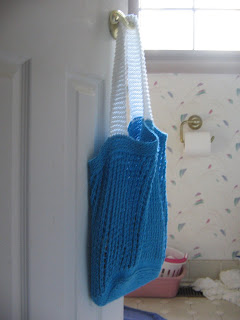 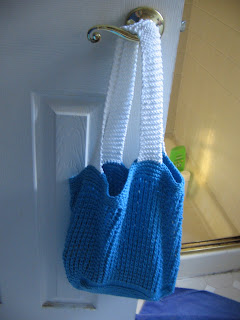 I'm eager to see how many Trader Joe's groceries I can cram into it. It will be a relief being able to lug my groceries over my shoulder instead of having those bags cut into my skin on my hands because they are ridiculously overloaded.

My Liesel is coming along nicely. 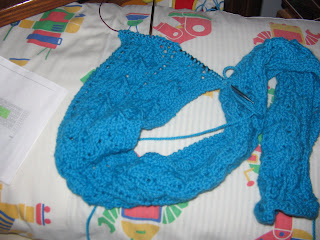 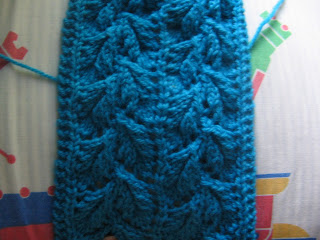 Its almost finished so I'll have to decide what to knit next.

I do have a pair of Fetchings that are missing one thumb... 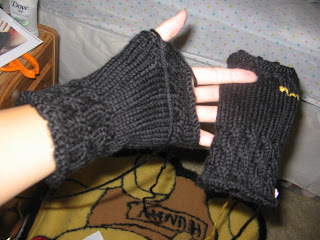 How silly is that? They are missing thumb which = 4 rows of stockinette and binding off. I started picking up the stitches and I got a phone call, and ever since I just haven't gone back to it. Absurd.

What a long entry. I guess that's what happens when you sit in Panera all day. But now its time for my soup in a bread bowl. Genius! Its a bowl, filled with tasty food, but you can eat it as well.
Posted by Lizzy at 3:28 PM